By using this site you agree to the use of Cookies, which help us deliver better services. Additional information


The BeFly World Team made its first debut in the mountainbike downhill racing scene at the first round of the IXS European Cup in Maribor, Slovenia. The season kicked off with a full swing on a legendary World Cup course in Maribor, loved by many of the best riders on the planet. The competition was fierce with half of the professional factory teams being present at the venue. All riders were blessed with warm and sunny weather, which is not common for April in Slovenia. Our riders enjoyed every single ride on the track. Read their impressions on the first race of the season. 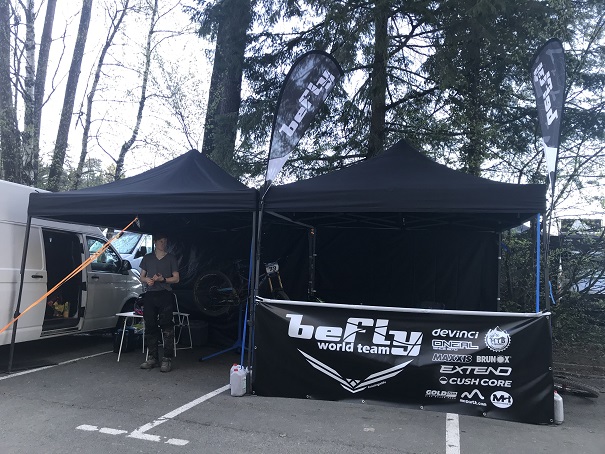 BeFly World Team pit stop in Maribor, Slovenia
Reuben Olorenshaw: “Maribor was an awesome track! My qualifying and race results were unfortunately not my best. I think I didn’t push the limits early enough in training and ended up making a mistake in my race run. I clocked the fastest time in the speed-trap though! It was just after the hardest section of the track, a long rock garden, so at least I know I’m up to speed in the rough stuff!” 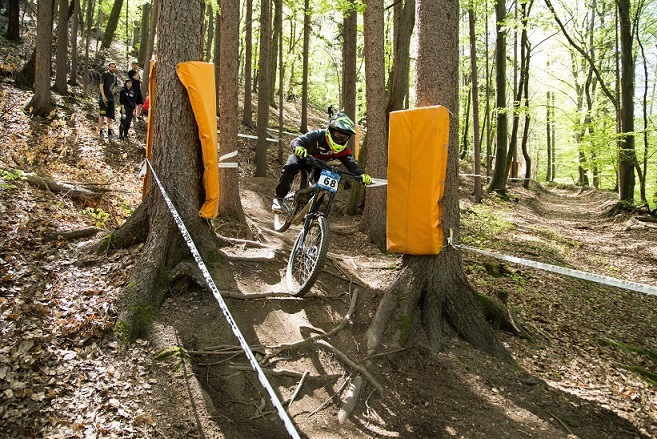 Reuben finished his race run on 56th place and with the fastest time in the speed trap, photo Lydia Bauer

Felix Bauer: “The first two Race weekends of the season were something I’ve been looking forward to all    winter long and so the excitement was accordingly high coming to Maribor. The last few years I’ve always struggled getting up to speed coming into the season, but this winter I’ve trained harder than ever before and even got to ride some serious Downhill tracks at the Befly World Team Camp in San Remo, so  I had a good feeling coming into the weekend. With loads of World Cup riders using the race as a final test before the first World Cup I knew it would be hard to get into the Super Final, but I still believed I could do it, so I went all in in my quali run. Unfortunately, I had a crash on one of the big jumps after a big mistake which obviously destroyed all chances to get into the Super Final. Despite this misfortune I was keen for my race run on Sunday and with a very good run I was able to place myself into 35th place overall, which I’m very happy with as a start.  I proved myself that the speed is there right at the start of the season and that massively improved my confidence in riding.” 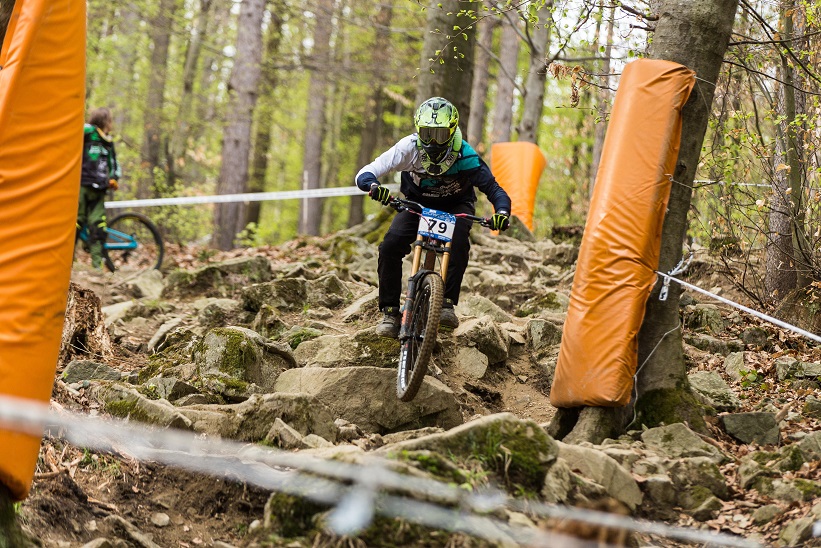 After the race weekend in Maribor, the riders only had 2 days to unpack and pack their bags again for the trip to the Croatian island of Lošinj for the first World Cup race. Lošinj is a completely new venue in the World Cup series and with its location and style of the race course, it qualifies without doubt for one of the most unique World Cups races in history of downhill racing. There was a lot of debates going on on social media about the race track being too short and not rough enough, but in the end it surprised all riders with challenging terrain, full of rocks that sent a lot of riders either to the doctor or to their mechanic. The goal for both of the BeFly WT boys was qualifying for the World Cup finals. 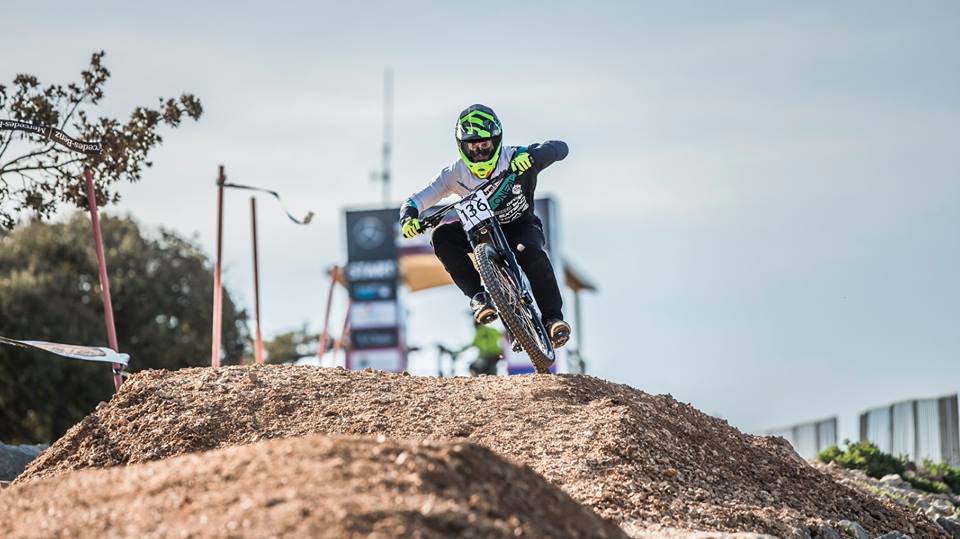 Reuben charging from the start gate at the Lošinj World Cup, photo: Phunkt

Felix Bauer: „ One week later it was time for the first World Cup of the season in Lošinj, Croatia. I’ve had some trouble qualifying for the World Cups last year, crashing out on every single one of the three qualifying runs I’ve attempted. As nominated rider, there is a certain pressure to deliver, that adds even more importance to this one run on Saturday afternoon. The short training time and the extremely brutal track weren’t the biggest confidence boosters coming into this run but I knew my lines and I knew I was able to deliver a good run if only I could stay on the bike. With the recent rule change only  the top 60 riders qualify into the final now, instead of 80 like last year, which made it even harder to make the cut.

My run started out well, but pretty soon after the first split time I got carried a little too wide in a turn and clipped one of the many stone walls with my handlebars. I held on to the bike and avoided a crash but came to a full stop in the process. Having to get back on the pedals and get going again in the middle of the rocks cost me a lot of time and despite giving my best to continue the run strong, more mistakes followed. In the end I was about 5 seconds out of a qualifying position which made clear that, with a clean run I would have been able to make the cut. Looking at the positives, I finally finished a Qualifying run without a real crash and I know the speed is there to make it among the Top 60. Now it’s time to keep on working hard to finally achieve this goal and make it into a World Cup final later this year. Losing is tough but in the end it teaches you a lot and every failure makes you better. „ 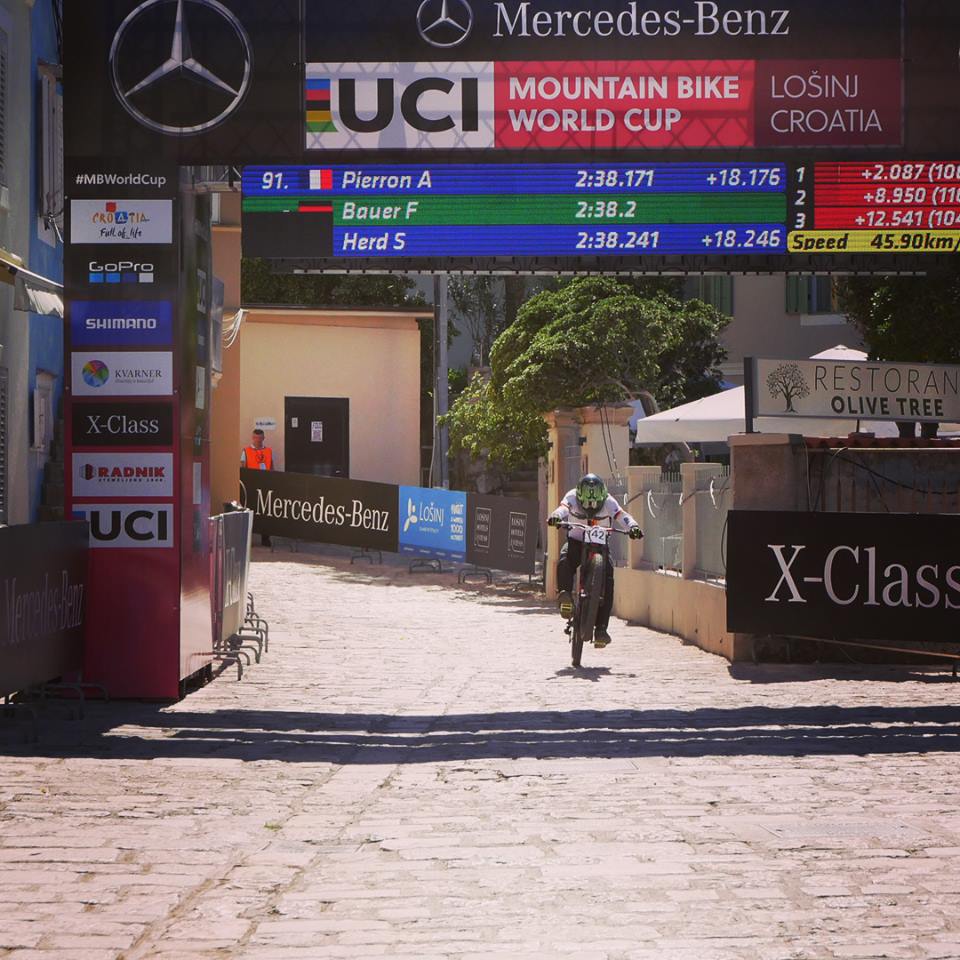 Felix through the finish line on the World Cup in Lošinj, photo: Oliver Kunz

Reuben Olorenshaw: “Lošinj was certainly a brutal track, but I think It was great. It pushed even the top riders to their limits! I also took too long to get up to race-pace in Losinj. I missed out on qualification by 5 seconds, messing up a rhythm-rock section which I managed to ride cleanly just once on my last practice run that morning.  I learnt some new things in Lošinj with respect to line choice and linking track sections, which was great. I’m looking forward to my next race in Winterberg!”

The boys finished their first World Cup adventure in 2018 on 93th (Reuben) and 94th place (Felix). Next stop for the team is the Dirt Masterts mountainbike festival in Winterberg, Germany, where the boys will take part in downhill and whipp-offs. In the meantime Špela will be entering her first enduro race ever. 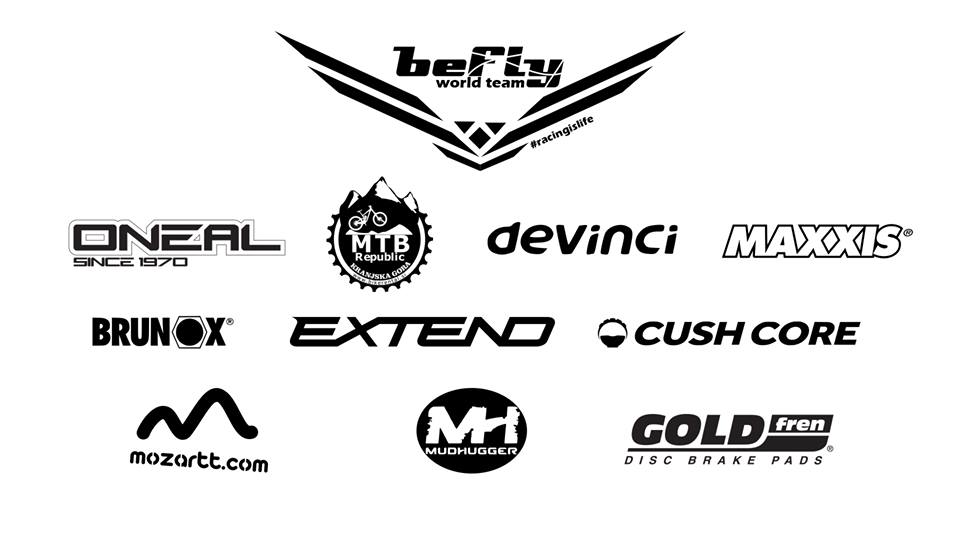